Thank you and Farewell!

I have arrived safely back to the UK and this marks my last blog post. So, first a thank you if you have been keeping up with my life in Uganda every so often. It is still hard for me to believe that it has come to an end.

As I said in my previous blog post, July was the time where I had to say goodbye to my Primary Six class. It has never been easy teaching up to 100 children especially with such a huge age range. My youngest in the class were 11 and my eldest were 16.  This meant that some had a pretty confident level of English and for others it was much harder. So teaching involved patience and perseverance! When I first arrived to start teaching maybe only three quarters of the class would listen and complete the work whilst the other quarter would be disruptive. I eventually won them all over by being “A very nice Madam today” to then be “Strict Madam” when they were not behaving well. I hardly ever raised my voice because I just sound stupid when I shout so I had to learn the skill of projecting my voice and silencing 100 children! I seemed to gain their approval when things didn’t quite go to plan – such as falling on my bum in the mud outside the classroom, occasionally getting my words in a muddle when teaching, a spelling mistake and drawing awful animal diagrams on the chalkboard that made me wonder if going on to art college is such a good idea... I feel that to them, because I’m white with “yellow hair and goggles” (goggles meaning glasses…) they thought I was someone very different to them so it was being relaxed and making a mistake now and then that made them realise I was just like them.
Teaching was definitely a bigger challenge than I first expected but well worth the effort and time. I am very proud of my class for working so well and their English has improved so much that I had a few people who live near the school telling me that the students actually talk to each other in English outside of school rather than in their local language of Rutooro. This is a huge step upwards as English is rarely spoken outside of the classroom. All aspects of their English improved and that is what I came out to Uganda to achieve.

The remainder of my time in July was spent at Home Again orphanage. We did art club endlessly! I even played a few games of basketball with the younger ones, which didn’t go too well as they refused to learn the rules and when I scored a goal for my team instead of celebrating they accused me of “stealing the ball.” I quickly learnt that it was better to not score goals and to just pass the ball on to someone in my team! 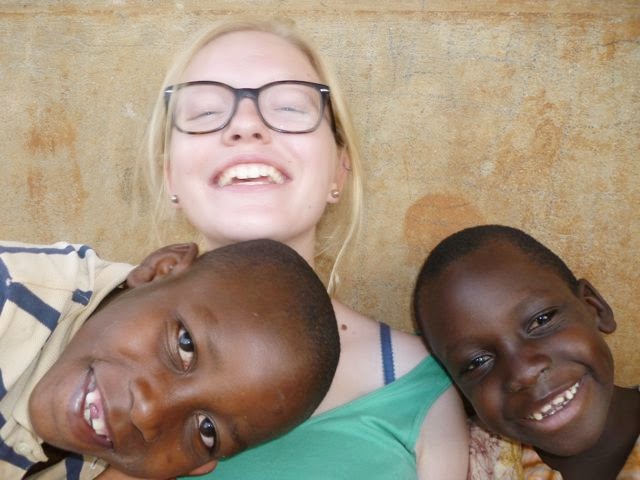 The penultimate week in Kaihura was when it really sunk in that we were leaving and that we would not be living in Uganda forever. That is when we all started to find each day very difficult on an emotional scale. The first time it sunk in was when I was doing art club. It was one of those days where I was on a bit of a short temper as it was one of the hottest days I had experienced in a while, the sun was burning us even though we were in the shade, the children were in a particularly hyperactive mood and had forgotten their manners so were up screaming in my face, “Bella! Bella! Paper! Paper! Give me paper! Bella! I want a pencil. Give me pencil! Bella he has my pencil. Belllaaaaaaa!!!! Paper! And me and me and me and me paperrrr.” So I was smiling trying to give out paper as fast as I could and eventually it calmed down and I had about 30 seconds to breath. We do art club on the steps outside the dorms as we have no tables, so I was sitting on the top step glaring at them all/ looking at them lovingly as I can be annoyed with them but I can never stay angry for long and I realised as high maintenance these children are in a week or two I am not going to have them in my life everyday, for every week, for another year… Then Margaret cut her toe on a stone and started screaming and Joseph stole Vincent’s pencil with lead to a few tears and a few firm words from me to resolve it and thennnn… I lost it! I gave the paper to Jodie (one of my Project Trust partners) to take over and had to go and sit at the bottom of the hill for a little while. People tell you about all the amazing people that you will meet on a year overseas and how the hardest part is settling in but no one emphasizes how difficult or emotionally scarring it is to leave!! And also how it tends to hit you all at once, not gradually. From then onwards, I think for all of us, every time we spent time with the children we were practically holding back tears.

What the children found difficult was that they were so used to having us around. We may have gone away for a weekend of the odd week or two in the holidays but we always came back. During my year there have been a few short-term volunteer teams and they have done really great work in Kaihura. When they were here, we suddenly become “old news” but when they left they would be waiting for us again. It was hard to communicate to the children that this time when we go away we are not coming back. (I hope to go back to Uganda but sadly it will not be in a week or two!)

Saying goodbyes to everyone in Kaihura really brought into focus how many friends I have made over the last year. Ugandan’s from my experience are not as free and open with their emotions as people in the UK so when some of our adult friends started crying it was the very last thing we were expecting!

For our last week in Uganda we went to Jinja to unwind and relax. Almost all of the Project Trust volunteers were there so it was really nice for us all to have a catch up.

Being back in England has been slightly mind-blowing.

All year I have mostly had to cook with only 8 ingredients – Pasta, rice, flour, oil, tomatoes, onions, cabbage and avocado. (A very exciting, rare find would be some green peppers, potatoes or a cauliflower!) So can you imagine how strange it would feel to me walking into a Tesco where there is food everywhere…

Two things I need to stop doing now that I’m back in the UK are:

1. Greeting strangers in the street.
I have come to notice that I will either be ignored or looked at like I’m scary when I walk past some one and say, “Hello! How are you?!”

My year living and working in Uganda has been phenomenal. I have met the most welcoming, caring, unique people that have become some of the best friends I shall ever have. Living in such a different country took a while to adjust to but has been such an irreplaceable experience with many challenges but I have learnt so much from it. I went out to Uganda hoping to give as much as I could to the people I would be working with but I did not realise how much Uganda and its people would give to me. Every hardship I faced would be made up with many more positives. I have come home feeling like I have achieved more than I thought I could and knowing that I have left something very good. It has been so satisfying watching my class grow in confidence with their English and on a more personal level watch the children grow up at Home Again orphanage. They have been the best of friends to me and it was heartbreaking to leave them.

I have also watched the charity Bringing Hope To The Family expand. It is a fantastic charity set up by a wonderful lady called Faith who always kept an eye out for us over the year. It consists of Home Again Orphanage, Hope Again Medical Centre, Hope Academy Primary School, Village Art (Cafe, Workshop, Craft Shop, Bridal Boutique and Hair Salon), a vocational school and the Bringing Hope To The Family Offices. Without Faith setting up this charity which started on 5,000 Ugandan Shillings (£1.25) there would be a lot of homeless, unloved children. So I would like to thank Faith and everyone who works for Bringing Hope To The Family for all their inspiring work.

Please check out their website for more news:
- http://www.bringinghope.org/ 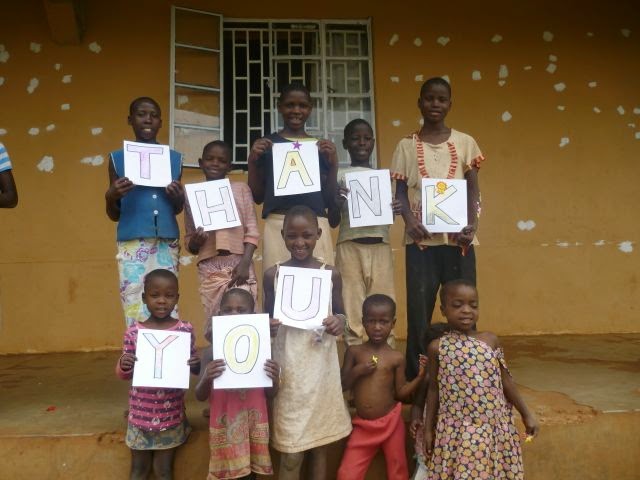 Another charity I have witnessed excellent work from is Know Think Act. It works directly with Bringing Hope To The Family and has been a great sponsor for them.

Please check it out if you'd like to learn more about their work. - https://www.knowthinkact.com/home

Thank you to everyone who has read my blog posts. I hope they have been interesting and given you a detailed account of my year. I've had a fantastic year!